Two new exits to Fournace and Bissonnet have opened. 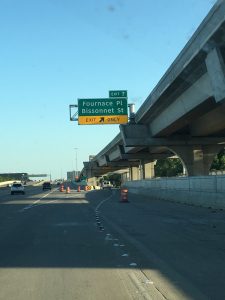 TxDOT’s original plans were to not reopen the Fournace exit from 610 as part of the reconstruction of the interchange. However after much citizen input, they agreed to add the exit to their design. Many Bellaire residents who live in the northern part of the city were upset that it would be harder to get to their homes, especially after TxDOT removed the Fournace exit from Northbound 610 many years ago.