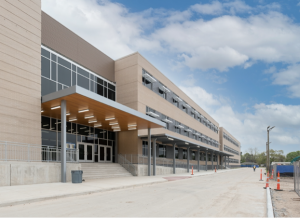 With the first phase of construction 85 percent complete, Bellaire High School is on track to debut three new wings — academic, fine arts, and physical education — when students return for the 2021-2022 school year.

Crews are installing technology in the three-story academic wing, which is nearly complete and expected to be outfitted with furniture in June after students depart for the summer.

Carpet has been installed in the auditorium and ceiling tiles and flooring are now being installed in the remainder of the fine arts wing. Epoxy flooring in the natatorium pool also is underway in the physical education wing.

“Progress on phase one is going as planned or better,” Construction Project Manager John Becvar said. “The switchover during the summer will be key to completing the project on time for the final phase. We have discussed and planned the move with the general contractor and school personnel and have come up with a plan that will work for all parties concerned.”

The $120 million project is part of the 2012 Bond Program, which called for the renovation or rebuilding of 40 schools, including 29 high schools. The completion of Bellaire will bring the district’s historic $2 billion bond project to a close.

Once the school moves into the three new wings, crews will begin tearing down the original building to make way for additional features, including an athletics field with artificial turf and a new track, administration wing, and four-story, 700-space parking garage. All will be built during the second and final phase of construction, which is expected to wrap up by the end of 2022.

“I am excited that we will be moving into most of the new building this summer,” Bellaire Principal Michael McDonough said. “And while we wait one more year for it to be finished, I’m excited for the students to experience all the natural light, dynamic workspaces, and beautiful athletic and fine arts areas.

“The final product will be a wonderful demonstration of the commitment that the HISD has to provide an amazing learning environment for kids.”