Cesar Cortes has been identified as the student who was shot at Bellaire High School. 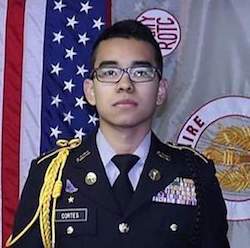 Click2Houston reports that Cesar Cortes,19, has been identified by a family member as the teen who was shot and killed at Bellaire High School on Tuesday.

He was active in the Bellaire High School Junior Reserve Officer’s Training Corps. According to the BHS JROTC website, Cesar was the Company Commander of the Delta Company.

Multiple friends of Cesar told ABC13 he had planned to serve his country and had already enlisted in the Army.

A vigil and moment of silence will be held tonight, January 15, at 7:30pm at Evleyn’s Park in Bellaire.